PHILIPPINE manufacturing activity continued to expand in March albeit at a slower pace than the previous month due to a softer rise in new orders, a survey conducted by IHS Markit showed.

The Philippine Manufacturing Purchasing Managers’ Index (PMI) in March stood at 52.2, inching down from the 52.5 posted in February but still above the neutral 50 mark that separates growth from contraction. This also marks the third straight month of expansion. 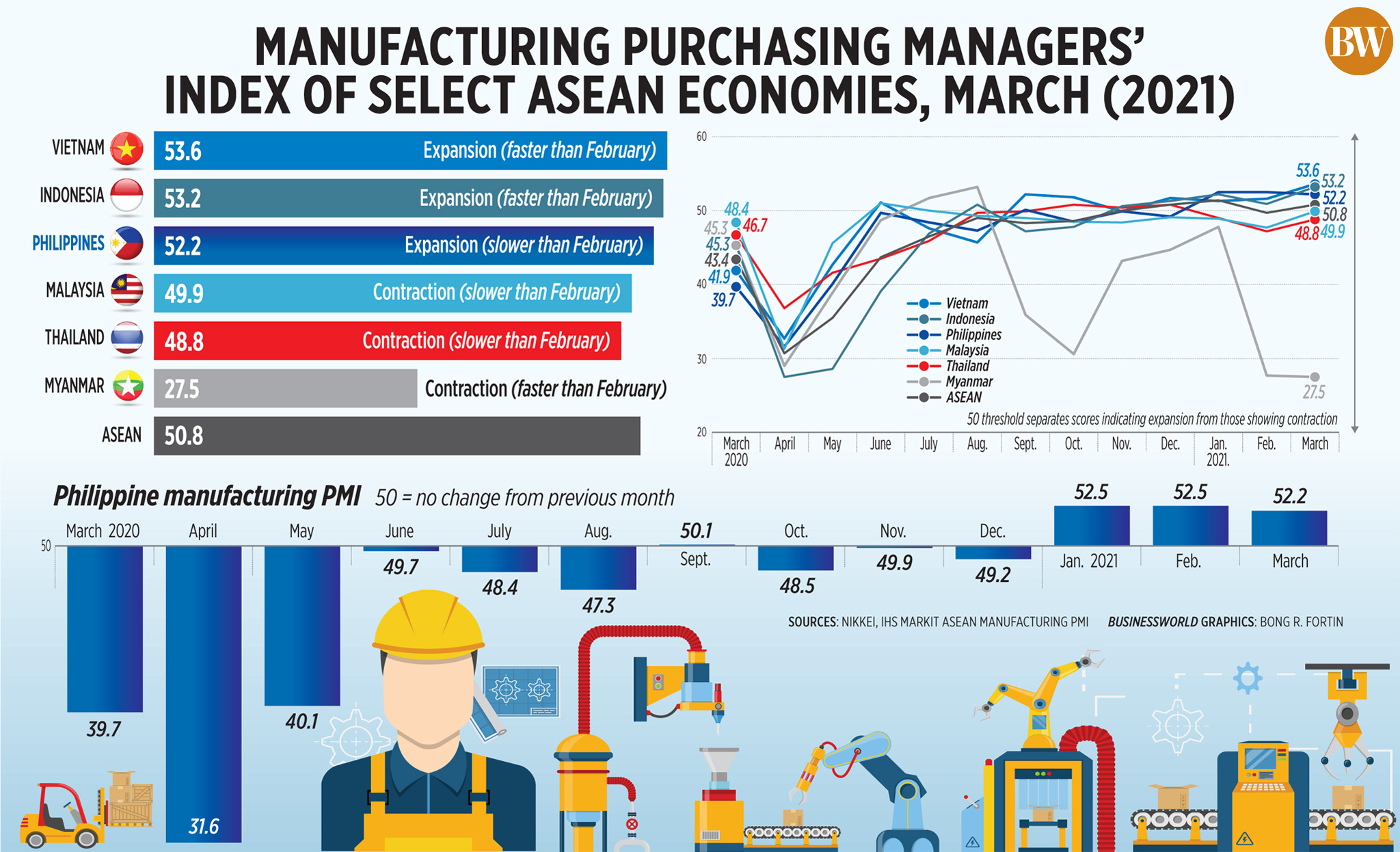 “The Philippines manufacturing sector ended the first quarter on a positive note with a modest expansion recorded in March. Promisingly, output volumes rose despite a moderation in new order growth. Meanwhile, employment levels fell only marginally with anecdotal evidence suggesting that this was mostly voluntary, and not due to cost-cutting efforts at firms,” Shreeya Patel, economist at IHS Markit, said in the report released on Monday.

Despite this, the country’s PMI was still better than the ASEAN PMI which stood at 50.8. The ASEAN PMI reading showed expansion, after it stood at 49.7 in February.

Among select Association of Southeast Asian Nations (ASEAN) economies, the Philippines saw the third quickest expansion pace after Vietnam (53.6) and Indonesia (53.2). The Philippines was ahead of Singapore (50.7).

“The ASEAN manufacturing sector saw a fresh improvement in conditions at the close of the first quarter, with growth driven by renewed increases in both output and inflows of new work following slight falls in February,” IHS Markit economist Lewis Cooper said in a note.

The Philippines saw a drop in overseas demand as the pandemic continued.

Despite this, output accelerated in March, with some Philippine firms noting efforts to accumulate finished goods in anticipation of greater demand in the coming months.

“A key area of concern, however, continues to be rising price pressures. Material shortages were often blamed for the higher costs incurred by firms. A sustained increase in client demand, however, allowed some firms to partially pass on rising expenses,” she said.

In March, factories had to deal with mounting supply chain pressures as lead times for inputs stretched.

“Panelists continued to cite freight delays as driving the deterioration in vendor performance, with delivery times lengthening markedly. As such, firms sought to increase their inventory holdings to minimize future shortages due to delays,” IHS Markit said.

March also saw a drop in employment due to falling backlog and voluntary resignations. This led to the 13th consecutive month of contraction in employment.

The pandemic continues to affect sentiment as optimism is below the long-run trend, IHS Markit said. Despite this, manufacturing players are pinning their hopes on stronger economic conditions, with the outlook for production still in positive territory in March.

“Nevertheless, a strong first quarter places the sector in good stead for a return to industrial production growth in 2021, with our current forecast expecting a 7.1% expansion,” Ms. Patel said.

The country’s PMI reading at beyond 50 for three months straight shows that firms are looking to rebuild inventory, said ING Bank N.V. Manila Senior Economist Nicholas Antonio T. Mapa. However, he warned that the renewed imposition of a strict lockdown will have a negative impact on both demand and supply in the manufacturing sector.

Metro Manila, Cavite, Laguna, Rizal, and Bulacan are under the strictest lockdown until April 11 in a bid to curb the increasing COVID-19 infections.

“With the economy shuttered, firms may readjust production schedules given expectations for weaker demand,” Mr. Mapa said in an e-mail.

Under guidelines of the Inter-Agency Task Force for Management of Emerging Infectious Diseases, manufacturing firms with activities related to medicine and medicine supplies; food and other essential goods; and those that supply products related to construction will be allowed to operate with full on-site capacity.

Despite this, Mr. Mapa said the overall restrictions on movement could impede production in the near term.

“April could see another dip in the index but not necessarily a contraction with the length of the lockdowns being the telling factor,” Mr. Mapa said. — Luz Wendy T. Noble

BW FILE PHOTO ABS-CBN Corp. warned consumers on Wednesday not to access its content through pirate domains, noting that it...