Will Gold Recoil On The Way To $2000 Or Hit That New Record High?

From mom-and-pop investors, to the marquee names on Wall Street, everyone seems to think that it’s a matter of when, not if, gold will hit $2,000 an ounce.

And why not? Trillions of dollars of stimulus are flowing in from global central banks. At the same time, safe-haven bids haven’t let up from those worried about further health and economic despair from a new wave of COVID-19 infections.

Add near-zero US rates, low real yields, record inflows into gold-backed exchange-traded funds (ETFs), and increased asset allocation to precious metals as a whole, and the stars are aligned for the world’s favorite shiny metal. 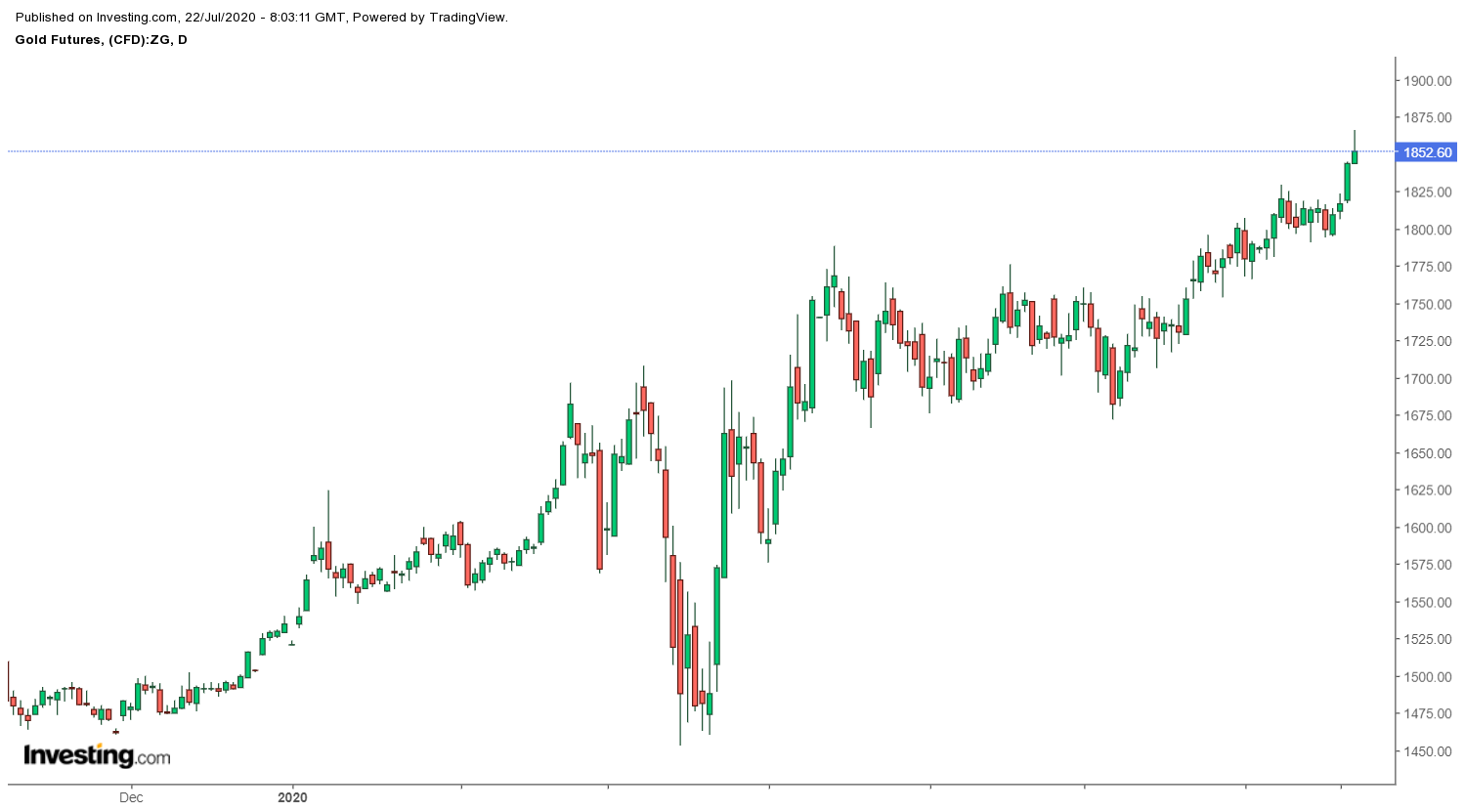 But as the voice of reason implores us to “hold your horses!”–it always does in a rampant bull market–it’s worth re-examining whether a snapback is likely in gold–either on its way to revisiting the record highs of 2011, or beyond, towards $2,000.

Indeed, the derivatives market shows that investors are betting big on gold reaching $2,000 by late 2020. Data from CME Group, which operates COMEX gold futures and options, shows there is more open interest in calls–which confer the owner the right, but not the obligation, to buy gold at a set price by a set date–at a strike price of $2,000 than for any other December 2020 options contract.

“No Obstacles” In Sight, But Rally May Take Breather

Slobodan Drvenica, the global head of analysis at Windsor Brokers in Amman, Jordan, said on the face of it, gold bulls had “no obstacles en-route to (the) $1,920 target.”

Yet, he cautions that “overbought studies on daily and weekly charts suggest that (the) rally may take a breather and position for its final push towards (the) $1,920” target.

Drvenica said a dip below the 20-day moving average at $1,792 for gold would sideline bulls for a “deeper pullback”, though he doubted that such a huge decline was possible ahead of the first test of $1,900.

Gold May Continue Rising, But Not In A Straight Line

Sunit Kumar Dixit, an independent analyst on precious metals, has a similar view:

“If gold sustains its momentum, buying can intensify taking it further to a record high of $1,920 without much resistance.”

But the gold rally may not continue in a straight line, he said.

Some Investors May Feel “Hesitant”

Adam English of the Outsider Club in Spokane, Washington, said gold’s rally of more than 20% so far this year could leave investors feeling “a bit hesitant” that $2,000 was still within reach this year.

“Some of the biggest names in the market are lining up behind a surge that will leave the all-time high far behind.”

“From the smallest retail investors, to the largest financial institutions, virtually everyone is now betting on much higher gold prices. Some surprising new big names just jumped on board.”

Nearly $40 billion flowed into gold-backed ETFs, which are typically favoured by retail investors, in the first half of the year, the Wall Street Journal reported earlier this month. It noted that the volume in those ETFs topped the previous annual record and highlighted robust investor demand for precious metals during the coronavirus pandemic.

On Wall Street, Citigroup is the latest of investment banks which see gold breaching $2,000.

A Reuters poll on Tuesday showed analysts expect gold to continue its blockbuster rally throughout this year.

Bank of America strategist Paul Ciana said he sees the potential for gold prices to hit highs of between $2,114 and $2,296.

Three other large investment banks–Morgan Stanley, JPMorgan, and Goldman Sachs–have been on board the $2,000 gold train for a while.

Jeffrey Halley, a strategist for brokerage OANDA, shared this enthusiasm:

“Momentum remains secure with gold, likely pent up after narrow range-trading for much of July.”

“Gold would need to record a daily close below $1,819 an ounce to call into doubt the bullish thesis.”

Disclaimer: Barani Krishnan does not own or hold positions in the securities he writes about.